Adriana Paz (she/her/hers) is an Afro-Colombiana activist, mother, and community organizer based in Lynn. She is one of the forces behind Prevent the Cycle and Mutual Aid Lynn – neither of which existed prior to the beginning of the Pandemic.

At the start of COVID-19, when the governments of the world were puzzling over and trying to figure out what to do, she and a few local heroes – including Nicole McClain, Tia Cole, Heather Ardrey, Aparna Raghu  – jumped into action. Borrowing some of the tools from MAMAS (mutual aid Medford and Somerville), the group was immediately able to start distributing food, diapers, and other essential supplies to Lynn families who weren’t getting the support they needed from public services.

Not long after, when the murders of George Floyd and Breonna Taylor shook the world stage, she joined with her Lynn sisters to create Prevent the Cycle: an organization committed to racial equity and systemic change through community engagement, education and policy reform. She was voted in as President to move forward the policy changes and start conversations about systemic racism and its effect on the city of Lynn.

While both of Mutual Aid Lynn and Prevent the Cycle have different missions, they both exist as a direct response to economic and representational disparities in Lynn and surrounding communities that both existed long before the pandemic and were greatly amplified by it.

“[Starting Mutual Aid Lynn] was just about addressing the needs that we saw weren’t being met in our community,” Paz said. “We started building resource sheets, centralizing all the information, and asking for assistance from other organizations when we needed help.

“But the biggest part about this is that it’s being run by women rock stars – just a bunch of women doing this for the community, and you can make some big changes with even small numbers of people.”

Mutual Aid refers to the voluntary and reciprocal sharing of resources within a community so that the whole can survive. Mutual aid tends to emerge in spaces where barriers to access exist – typically in BIPOC, AAPI, Immigrant, Queer/LGBTQIA+, and Disabled communities (and all of those intersections), to name a few. This is because the systems and processes that exist to help the population in times of crisis, fail for those who don’t fit tidily into the system.

Mutual Aid Lynn, partially funded by the Lynn Community Care Fund, was created in direct response to bureaucratic red tape preventing those individuals in the Lynn community – many of them single mothers, essential workers, or both – from getting what they needed immediately. While the pandemic didn’t create these experiences, it exacerbated them, making the challenges faced by Black, Brown, and Immigrant communities that much more apparent.

After a couple of months of doing this work with Mutual Aid Lynn, when the murders of George Floyd and Breonna Taylor and many others became household conversations, Adriana and her team doubled their efforts to create Prevent the Cycle. The team organized Black Lives Matter protests, demanded police reform and policy change, and worked to educate and raise awareness about systemic racism and distribute the tools of protest. 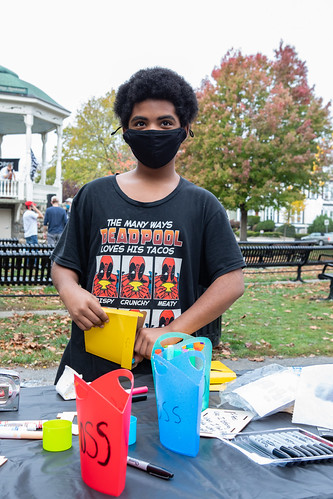 “We started with police reform, but we said this wasn’t enough, because we also wanted change in policies created at City Hall and in the way they are communicated to Lynn residents ,” Paz said. “But this [call for police reform] is what opened the door to everyone talking about it and city leaders to start listening, involving themselves more, and take our recommendations and proposals.”

She is hoping that this awareness will finally lead to change happening not just on a surface level, but that it will be transformative throughout these systems. Real change can only occur when the source of the problems are dealt with, not just the symptoms.

When asked how she was able to accomplish all of this when most people were struggling to even know what to do this year:

“It felt like I had this stored energy and I don’t even know where it came from, but I knew that I had to. I didn’t know if anybody else was going to do it, and I needed to do something,” she said. “And I needed to be fully a part of it. I couldn’t just be an onlooker and participate in the silence, so I knew that I had to step into this and immerse myself in a way that was very different than I ever had before.”

More often than not, the responsibility of grappling with these challenges has perpetually fallen on the shoulders of Black women who believe that if they don’t step up, then no one will. So while Adriana Paz and many other determined Black women like her are willing to do this work, she hopes that this movement will encourage many others to join in and do their part. Allies have always been needed, but while leaders are finally starting to listen, now is an especially good time to step up and pledge allyship.

“It’s incumbent upon the community members who have spare time, resources, and privilege to start building relationships, and trust within communities facing the [challenges of systemic racism],” she said. “And if you don’t know where to start, look at the stuff that your community members have done up up to this point for the last year. expose yourself to that work, and figure out the different ways that you can work together.”

You can support Adriana Paz’s efforts in Lynn by following Prevent the Cycle on Facebook or donating to the Lynn Community Care Fund – which directly supports Mutual Aid Lynn.

Celebrate Women’s History and Intersectionality this Month North of Boston